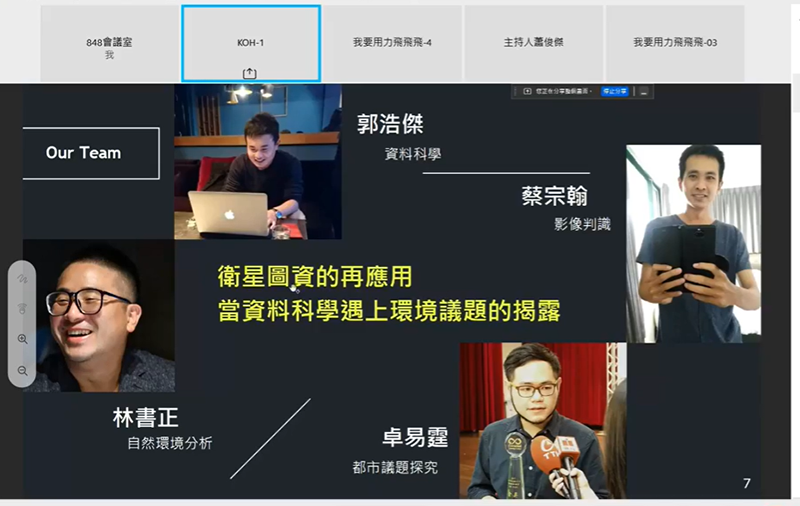 Space has become the new stage for global competition in this 21st century, the Ministry of Science and Technology (MOST) is therefore investing great effort in the industry and related technology. To implement MOST’s policies, NARLabs’ National Space Organization (NSPO) has teamed up with the National Museum of Natural Science and held the “2021 Taiwan Space Hackathon – Creative Ideas Tournament”. The event brought together creative partners from multiple fields, showcasing both their intellect and their expertise with “Space and Environmental Issues Directly Affecting Taiwan” as their guiding topic, which has resulted in fresh creativity for the country’s future space missions. Due to the ongoing pandemic, however, the finals were held online on June 6, with team KOH winning first prize – NT$50,000. Snatching second place was the NCKU Medical Electrical Emergency Team, winning NT$30,000, while team MAX 3D was awarded NT$20,000 for third place. NT$10,000-awards were also given for categories such as creativity, potential and teamwork.

Additionally, winners of the creativity, potential and teamwork awards were teams “Your Home’s in Space! Das Spaceto!”, “Fly to the Universe”, and “Universe Firework Operation”, respectively.

Anyone could apply to the tournament, with a total of 124 teams and 368 researchers participating in several challenging fields, including living convenience, network limitations, environmental sustainability, science education, promoting peace, Taiwan’s global presence, and much more. Before the tournament, eight in-person courses were planned for participants, among which was the course “Is Reaching the Moon Difficult?” by the director of the National Museum of Natural Science, “A Space Industry in Taiwan?” by NSPO’s former director, Jun-Liang Lin, and “Uncle Rocket’s Space March” by National Yang Ming Chiao Tung University professor, Wu Tsung-hsin.

The tournament also prepared 13 online courses with content ranging from NSPO’s satellite control, image processing, test integration, and other fundamentals, as well as the plans and blueprints of satellites FORMOSAT-5, FORMOSAT-7, FORMOSAT-8, TRITON and CubeSat. Such materials helped everyone to better understand Taiwan’s space capabilities and stimulate their creativity.

NARLabs’ NSPO already has 30 years of experience in executing space projects, thereby accumulating a wealth of knowledge and capabilities. The organization also participated in NASA’s space hackathons between 2017 and 2019, and held a Taiwan-French Space Innovation Hackathon “ActInSpace” in 2018. These events have shown the many wonderful and creative works of space science and technology brought forward by Taiwanese talent. Through the “2021 Taiwan Space Hackathon – Creative Ideas Tournament”, NSPO will bring about Taiwan’s artificial satellites, observation data, ground facilities, and other space-related projects through the brainstorming of many expert minds, allowing for new fields to be applied in space technology and maximizing its scope. Simultaneously, the competition can strengthen the relationship between such technology and the public.