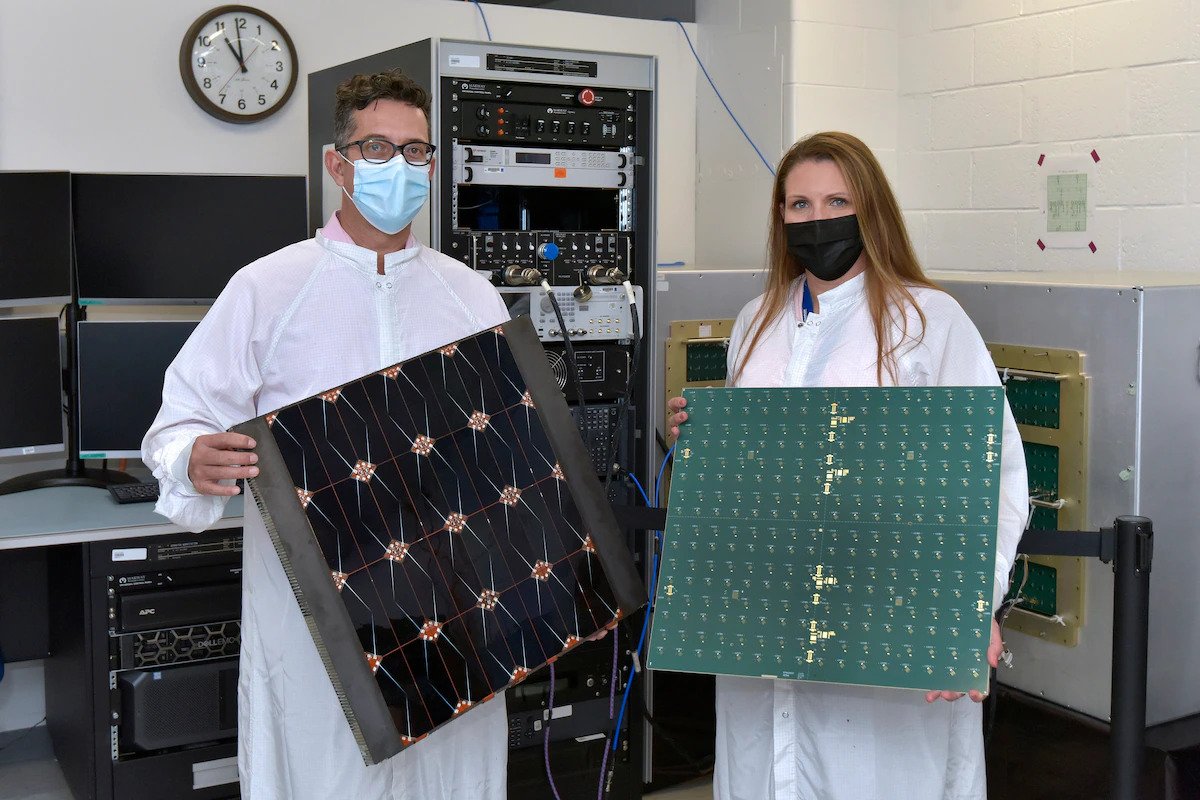 A ground demonstration of novel components for the “sandwich tile” were used to successfully convert solar energy to radio frequency (RF) – a fundamental step required to pave the way for a large-scale solar power collection system in space.

In 2018, AFRL awarded Northrop Grumman a contract worth over $100 million for the development of a payload to demonstrate the key components of a prototype space solar power system. The sandwich tile is currently under development as an essential payload component for Arachne, and as a building block for a large-scale operational system.

The sandwich tile consists of two layers. The first layer is a panel of highly efficient photovoltaic (PV) cells which collect solar energy and provide power to the second layer. The second layer is populated with components that enable solar to RF conversion and beamforming.

“The successful conversion of sunlight into RF energy in a lightweight and scalable architecture is a significant step forward in delivering the technology building blocks to achieve the Arachne mission,” said Jay Patel, vice president, remote sensing programs business unit, Northrop Grumman. “We are helping to deliver a pioneering capability that can provide a strategic advantage to our forces around the globe.”

“The SSPIDR Project office is very excited about this baseline capability being exercised in the laboratory environment,” said Melody Martinez, SSPIDR deputy project manager. “Converting solar energy into RF energy at the component-level is a pivotal step to realizing space-based solar power beaming on a larger scale.”

The ground demonstration used a solar simulator to illuminate the PV side of the tile and begin the Solar-to-RF conversion process. Because the solar simulator was so intense, attendees viewed real-time RF output data on monitors from behind an industrial grade flexible plastic barrier, and cheered when an RF energy peak appeared indicating successful power conversion and RF radiated power.

“It was extremely exciting to be present for this critical milestone in the SSPIDR portfolio, and seeing all the hard work our partners at Northrop Grumman have accomplished,” said Kyle Gleichmann, Arachne’s chief engineer. “We look forward to future milestones as we move forward to launching this keystone payload. It’s crucial we demonstrate this technology on-orbit as soon as possible to meet our nation’s needs.”

Successful testing of the individual tile for the Arachne payload provides a building block for a square meter panel of tiles – a threshold that has not yet been met by any other solar-to-RF experiments. Arachne is anticipated to launch in 2025.