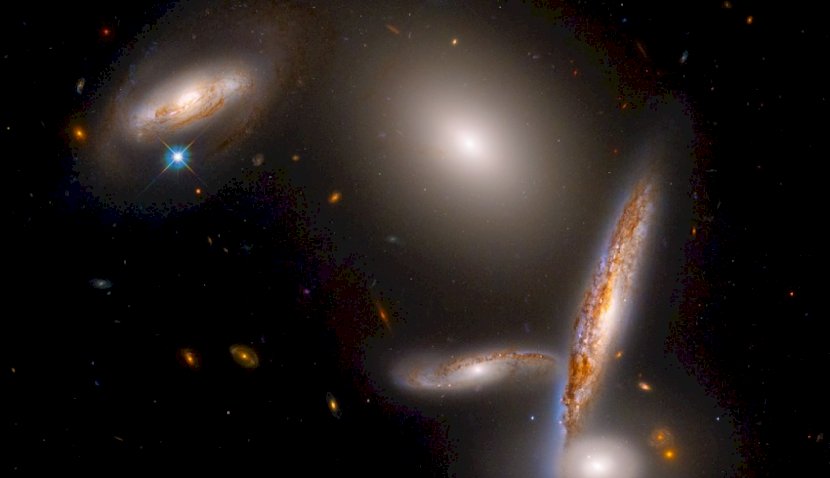 The Hubble Space Telescope turns 32 this week, and today released an anticipated image of a “close-knit” group of five galaxies in a “dance” to celebrate its anniversary.

Dubbed The Hickson Compact Group 40, the collection of galaxies crossed paths in their evolution, and have now created an “exceptionally crowded and eclectic galaxy sampler”, NASA officials said in a statement.

The group of galaxies, captured by the telescope developed by NASA and the European Space Agency, are set to merge and form a giant elliptical galaxy in around one billion years.

“Caught in a leisurely gravitational dance, the whole group is so crowded that it could fit within a region of space that is less than twice the diameter of our Milky Way’s stellar disk,” NASA said.

Included in the group are three spiral-shaped galaxies, the most common type, an elliptical galaxy and a lenticular (lens-like) galaxy, which are typically shaped like a disc.

The telescope was launched on 24 April 1990 and has since helped astronomers and scientists understand the universe more every day. On Christmas day in 2021, its successor, the James Webb Telescope, launched into space, and is set to capture even greater images of the cosmos.

While similar galaxy groups have been found, the HCG40 is “notably isolated” in its own section of the universe according to NASA, towards the direction of the constellation Hydra. Hydra is the largest and longest of the 88 modern constellations.

“One possible explanation is that there’s a lot of dark matter (an unknown and invisible form of matter) associated with these galaxies. If they come close together, then the dark matter can form a big cloud within which the galaxies are orbiting,” NASA said.

“As the galaxies plow through the dark matter, they feel a resistive force due to its gravitational effects. This slows their motion and makes the galaxies lose energy, so they fall together.”

The Hickson group is one of the most densely packed galaxy clusters, and has been studied in visible light, radio and X-Ray wavelengths.

NASA said all of them have compact radio sources in their cores, meaning supermassive black holes could be present.

“Observations suggest that such tight groups may have been more abundant in the early universe and provided fuel for powering black holes, known as quasars, whose light from superheated infalling material blazed across space.”

A quasar is an extremely bright light at the core of a distant galaxy and is powered by a supermassive black hole feeding on the matter, unleashing a gush of radiation.

NASA said studying these galaxies help astronomers understand where galaxies assemble themselves and what they are assembled from.