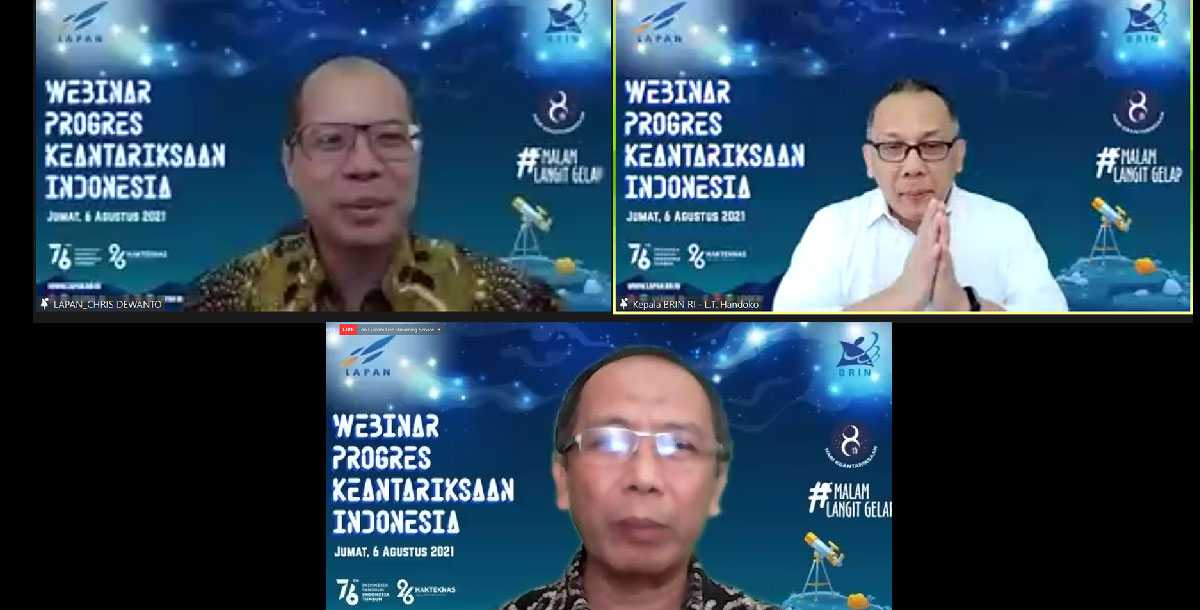 In commemoration of the 8th National Space Day, the National Institute of Aeronautics and Space (LAPAN) held a webinar on the progress of Indonesia’s spacecraft. In this activity, Indonesia’s space development developments were presented in terms of organization, remote sensing, aviation technology, and also space science.

National Space Day itself is based on the signing of Law no. 21 of 2013 concerning Space. “The Space Law itself has a long history of travel. The initial process of making it began in 1990 until it was finally inaugurated on August 6, 2013. The promulgation of the Space Law is also a milestone in itself, because not many countries have special policies related to space,” said the Head of LAPAN, Prof. Dr. Thomas Djamaluddin.

Present at the same event, the Head of the National Research and Innovation Agency (BRIN) Dr. Laksana Tri Handoko, on this occasion invites all parties to think about the business model and the overall business process. So that the results of various studies do not stop at the time the innovation is made, but down to the downstream what benefits can be obtained by all parties. The target for the future is how together we can create Indonesia Incorporatedso they complement each other and collaborate, for example, if we launch two satellites, at least one satellite must be launched from Indonesia. BRIN is ready to provide better infrastructure and greater investment. The existence of BRIN will also strengthen the mobilization of greater researchers from various fields to support each other.

Referring to the 2016-2020 space chart, there are some pretty good progress from the development of Indonesian space. Main Secretary of LAPAN Prof. Dr. Erna Sri Adiningsih said, in the 2016-2020 renduk period there were several achievements, including in space science, namely the establishment of a regional space weather information and prediction system as well as an early warning information system for extreme atmospheres, in remote sensing, namely the operation of the National Remote Sensing Data Bank. (BDPJN) with a spatial data network system based on remote sensing and remote sensing for natural resource control, the environment, disaster mitigation, and special uses. Then in mastering satellite technology such as technical guidance for the construction of Nano Satellites for universities, also in mastering aeronautical technology such as the formation of a national aircraft development consortium. By joining LAPAN into BRIN, it is hoped that it will create an ecosystem of space science and technology and its utilization to optimize the role of stakeholders and the community in an effort to increase economic growth, he added.

Also present in the webinar on the progress of the Indonesian spacecraft were the Deputy for Remote Sensing of LAPAN, Dr. Orbita Roswintiarti, Deputy for Aviation and Space Technology at LAPAN Dr. Rika Andiarti, and Deputy for Space and Atmospheric Science Halimurrahman, MT. Each deputy explained in detail what the achievements of each deputy were in the period of approximately 2016-2020.

At the end, as a closing, the Head of LAPAN Prof. Dr. Thomas Djamaluddin, invited all participants to also attend in the evening to take part in the talk show and virtual observation of the dark night sky which will be broadcast live from the LAPAN RI youtube channel. “Hopefully the weather is clear and we can get an understanding regarding the meaning of the dark sky night. We must protect the dark sky and save its existence for the younger generation. So that they can enjoy the sky and certainly inspire us all through the phenomena that exist in the sky and also spur the use of technology to continue to be developed.