CHRISTOPHER ALTMAN – ARC Future Fellow PhD Scholar in Quantum Technology, NASA-trained Commercial Astronaut, Cofounder and Chief Scientist of the ElectriCChain and the SolarCoin Foundation – “… was asked to provide the Keynote speech for the final Mobile Monday: Amsterdam. The Future of Space”. The speech was broadcast live to 108 sister cities around the world.

How many of you have just had a baby?

Imagine what it would be like to see this with your own eyes —to see the Earth from space.  You may soon be able to experience this yourself, with your children, and your families.

I was raised from early childhood to believe that our human potential is limitless and unbounded—in our capacity to learn, to explore, to transcend limitations—and in mankind’s ultimate destiny to expand outward, to explore the Cosmos.  As a young boy, my father introduced me to visions of great thinkers and dreamers, like Carl Sagan. He instilled in me a fascination, a deep appreciation—for science, for technology, and for space exploration. Today you’ll hear about next-generation internet technologies that will enable us to transcend spaces—to transcend locality.

These new technologies—Twitter, Facebook, Wikileaks—are all expressions of the a singular, fundamental human desire—our desire to share, and to connect with each other. Our desire for unity and belonging, for transparency and connection—our yearning to break down the walls of separation, to transcend our differences and our divisions—to share our personal moments of joy, our everyday experiences—with our loved ones, our families, and our communities—to be a part of something greater than ourselves.

We are collectively participating in the development of a global awareness—in the collaborative creation of a brighter future, and a better world. The next revolution in science and technology will take this transcendence of space literally: In opening access to space to all of us. 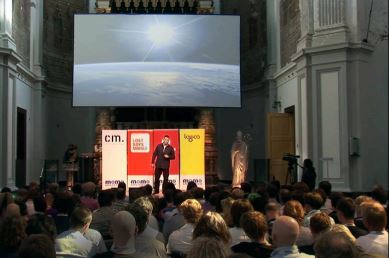 The first race to space was driven by national competition: a race for supremacy between the US and the USSR. The achievements of the Apollo space program gave us countless spinoff technologies, and inspired a whole generation.

Our contemporary generation today needs its own inspiration, its own Sputnik moment— its own Moon shot. That inspiration will be a widespread access to space, for the wider public, as more of us are able to go. And as we return, we will share this experience with each other. 50 years after mankind first journeyed to space, we are at the dawn of a new era: the opening of commercial spaceflight.

This will happen during our lifetimes. We are here to witness it, and to personally experience it. Many of you in this room, and many of you hearing these words, will have the opportunity to go to space. We’ve been fortunate to witness the revolution of personal computers, as they were linked up together, to form a global communications network. That revolution has transformed our society, and given birth to our modern way of life.

We’re about witness another revolution, a revolution in space.

This revolution has the potential to transform human society—just as profoundly as the worldwide web has transformed us, and given birth to our information society. The transformations to our society, to our way of life, to our relationships, our identity, and to our future generations—will be just as profound as the computer revolution was to our last generation. Opening doors to low-cost commercial spaceflight means the next generation will take to space, and bring this experience back to us, so that we can share in their experiences.

The next generations will see our return to Moon, our next steps outward—to Mars, to asteroids—for mining, for exploration, and for long-term colonization. In the generations to come, we will not only visit space—we will go there to stay.

Earth will not just be a point of origin, but it will be a destination.

This next wave of commercial spaceflight ventures is just the first step—the doorway towards our future as an interplanetary species.  I began my career at a multidisciplinary research institute—Starlab—where our research focus was the Deep Future. We worked together to develop and to explore long-term research initiatives—with the capacity to profoundly and positively impact future generations.

This same kind of long-term thinking is behind a recent partnership between DARPA and NASA— They’ve recently founded the “100 Year Starship” program, an organization with the vision to take mankind to the stars—and to develop the technologies that will enable us to explore Deep Space.

The human space program is now really aimed at settling other worlds.

In contemporary society, we go through life with blinders on—aware of our place in history, but not considering how our actions will concretely and tangibly impact the lives of our children, and our grandchildren, 50 and 100 years from now. This kind of long- term, global, deep future thinking is exactly what we need right now to inspire the next generation.

As a species, we don’t really awaken our true potential unless we’re pushing the boundaries of what is possible, of what is known. The act of exploration, of discovery— expands our minds, extends the realm of possibility—and creates wholly new possibilities by the inherent act of stretching outward—to go further than was possible before.

We recently celebrated the 50th anniversary of human spaceflight. 50 years from now, we’ll be living and working on the Moon, we’ll have permanent outposts on Mars—we’ll be mining the asteroids—and we’ll be making significant progress towards exploring other worlds—to becoming a truly interplanetary species.

In doing so, we’ll learn more about ourselves, and our unique place in this universe. This will give birth to new technologies—technologies that will help mankind sustain itself towards the future.

Not long ago, I was selected as an astronaut candidate, to train for the next generation of suborbital and orbital commercial space programs. My father instilled in me this dream, this passion to work towards mankind’s long-term future. He passed just a few short weeks ago, not long after my election. I never got to share with him the culmination of my lifelong dream to become an astronaut. So I’m sharing it with those of you here today—for the next generation, and for the generations to come.

I envision a future where spaceflight is open to all. Where we can all experience the profound impact of seeing the Earth from space—without boundaries, without borders, without national divisions.

Seeing the Earth from space is a spiritually profound experience. It’s like opening your eyes for the first time. I have faith it will reduce conflict as we transcend our national boundaries, and set aside our differences in pursuit of a higher calling.

This will bring us closer together as a species, and awaken us to the deep and profound connection that we all share with one another. It will grant us a new realization of what it means to exist, and to be human.

We’re at the outset of the greatest human adventure of all—the journey to other worlds.

CHRISTOPHER ALTMAN is a veteran of multidisciplinary research institute Starlab, where his work was featured in a Discovery Channel Special and the Guinness Book of World Records. He has pioneered initiatives at NASA Ames Research Center and Kavli Institute of Nanoscience, as Chairman for the UNISCA First Committee on Disarmament and International Security—selected as annual recipient of the RSA Award for Outstanding Achievement in Government Policy—and as part of the US Government’s fast-track QuIST program in the global race for quantum supremacy.  As Director of the Board and Chief Science Officer for the world’s first commercial astronaut corps, then as Director with the successor to NASA’s Breakthrough Propulsion Physics Program, his leadership and contributions range from global blockchain and artificial intelligence to quantum technology and next-generation spaceflight. His inaugural keynote address as an astronaut candidate was broadcast live to 108 sister cities around the world. NASA allocated funding to the corps for its first manned spaceflights the following spring.