Joe Lennox – Teacher of space science, history and technology and former President of The New Jersey Aviation Hall of Fame.

The date was February 20, 1962. I sat in my fourth grade class and listened to the radio broadcast – no classroom TV’s in those days – of Astronaut John Glenn’s launch into orbit that was being heard through the school’s intercom system. I clearly heard Glenn’s vibrating voice announce to the world “the clock is operating, we’re underway”. I never imagined that in those few brief moments, my life would change forever. 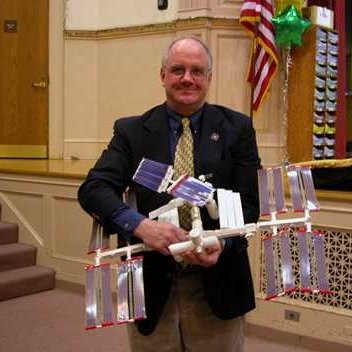 From that moment on, I became totally enthralled with spaceflight and it became a passion that still burns in me today.

I couldn’t get enough about space flight and astronauts so I began creating a collection of space memorabilia that is today referred to as  the largest and most complete, private collections of space artifacts in the Country.

It includes more than 60,000 clippings on EVERY American human space flight in chronological order, kept in over 200 volumes totaling over 32,000 pages. Over 800 books, medals, audio / video tapes, DVD’s, stamps, records, movies, slides, toys, puzzles, jewelry, clothing, models and many other type of memorabilia, play large roles in my “museum”. I have received personal correspondence from more than 750 astronauts, NASA managers / administrators, government leaders, space authors and media personalities. More than 200 spacecraft contractors have sent me thousands of pages of spacecraft / hardware documentation along with over 70 actual pieces of hardware.

I witnessed the launch of Apollo 16 from the VIP reviewing stand thanks to the late George Low, then NASA Deputy Administrator as well as the launch of STS 133 from the same location. Several contractors have given me personal tours of their facilities and I have received 2 very up front and personal tours of Kennedy Space Center that included going up on the Space Shuttle Launch tower when Discovery was awaiting lunch and sitting at the controls of Shuttle Atlantis while it resides in the Orbiter Processing Facility.  Those adventures were thanks to Mike Leinbach – retired Space Shuttle Launch Director. Talk about a kid in a candy store!  NASA Lessons Learned Program Manager, Mike Ciannilli is a trusted friend who provides advice, guidance and some very special mementos. Is anybody more fortunate than me?

I attended La Guardia Aeronautical College with the goal of becoming an aeronautical engineer and ultimately becoming a NASA Flight Controller. As with space missions, the original flight plan doesn’t always go as expected so back up missions are vital to success.

After being in college for about a year and a half and loving every minute of it, I woke up one morning to the discovery that I was going blind. It’s not that it was dark and I was sightless – it was blurry – REALLY BLURRY. When the eye doctor put 2 fingers 2 feet away from my left eye, I couldn’t tell that there were 2 fingers there. I was diagnosed with Keratakonus – a disease that deteriorates the cornea – the part of the eye that creates focus. It usually effected men in their late teens, early twenties and both eyes would eventually go the same route about a year and a half apart. Dr. Levy was right on the money.

Thanks to medical science, I successfully received 2 cornea transplants about a year and a half apart and my vision was restored – but not well enough to see the small drafting and engineering data I needed for school. It appeared my space dreams were doomed.

At this point, I was 23 years old and wanted to marry my wife so I went down to Wall Street and got a job in the banking industry. My love of the space program and my collecting were still very much a part of my life, however.  I read everything I could get my hands on about space science, history and technology and kept adding great items and new scrapbooks to my ever- growing collection.

And then out of nowhere came the back-up mission.

When my son began going to school, I approached his teacher – to this day I really don’t know what made me do it – and said that I knew a lot about the space program. Would she like me to come in to her class and give the students a class / presentation. She jumped at the idea so I went in with cardboard boxes filled with models, memorabilia and all sorts of items.

The kids seemed to really enjoy it, I kept their attention and didn’t embarrass my son, so it seemed like a successful experience. The next year, she asked me to come back in and my other son’s teacher asked me to come in to her class, too.

One thing led to another and word got around about my programs. Today I give about 50 presentations a year on many, many topics concerning space science, history and technology. I was even on the staff of The Gifted Child Society where I taught three 10 – week classes to students of all ages. I taught those classes for over 15 years.

I am now retired from the banking industry and can dedicate much more time to my presentations. I had a very successful banking career but teaching about the space program is my true calling.

I present at schools, scout groups, museums, summer camps, civic groups, libraries, senior centers and many other venues. Now things have come full circle and I go into my grandsons’ classes.

As you can see, I actually did reach my goal of being a part of the space program and I honestly think I enjoy this more than I would have as a flight controller. I really love teaching and seeing the excitement in the children’s eyes when they hear an amazing fact or see a very special memento. Some NASA staff members support my efforts with special items, documentation and teaching aides.

I close my presentations with a short version of my vision story to show the participants – especially the children – that you should never give up on your goals and dreams because even if something bad or unexpected happens, you can still reach your goal. Maybe not in the original way you planned but alternative plans are sometimes much better.

As I have made my self an expert in space history and am very well versed in the science of space, I also strongly stress the importance of reading. Everything I learned, I learned from reading and the children can make themselves experts in any subject they want through the power and joy of reading.

My collecting priorities have changed dramatically over the years. Instead of collecting just to expand my museum / collection, now I want to receive documentation and special items so I can use them in my teaching.

Today I use PowerPoint presentations, a computer projector, foam filled suitcases for my models and special carrying cases for everything else. Just as the space program has, I’ve come a long way.

I have told this amazing story about my eyes and my teaching, along with how my collection was created – including many seemingly crazy ideas – and a light history of the human space program in a book I had published titled ” Vision For Space”. I have also written a children’s book teaching space science, history and technology titled ” The A B C’s Of Space Exploration.

I am a member of The National Science Teachers Association, The National Space Society, the Planetary Society and the Space Foundation. I am a former member of the selection committee for The Astronaut Hall of Fame and a past President and Director of Education at The New Jersey Aviation Hall of Fame. I have appeared on NBC – TV, been broadcast on Canadian Broadcasting Radio and have been the subject of several newspaper articles.

The joy I have received from collecting, teaching, reading and writing about the space program is immeasurable.  My wife of 44 years and my sons and grandsons support my efforts in countless ways and their pride in what I have accomplished is among the greatest aspects of my life. I have been a very, very lucky man in so many ways.

I live a normal life today in relation to my vision. I drive, bowl, played baseball with my son and grandsons and can read with no problem. Those small details and print still cause problems but that is a very small price to pay for the fabulous life I have been privileged to lead.

So, as you can see, my life has been one astronomical ride and it all started on a cold winter day when I was only nine years old. Just amazing!!!