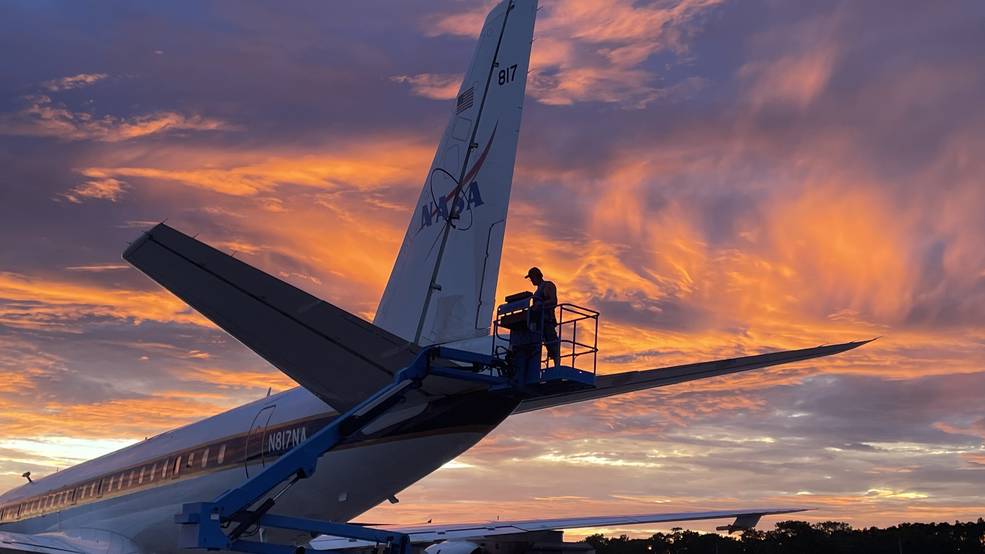 A team of NASA researchers are once again using NASA’s DC-8 airborne laboratory to study ice crystals – and more – within the heart of large thunderstorms in a bid to improve jet engine designs and increase flight safety.

The work is part of NASA’s High Ice Water Content (HIWC) research activity, which has previously conducted two flight research campaigns: the first out of Florida in 2015, and the second out of Florida, California, and Hawaii in 2018.

Now, the team is back at it again, conducting a flight campaign during July off the southeast coasts of the United States and the Gulf of Mexico.

This time, the team – which includes Federal Aviation Administration (FAA) and Japanese partners – is using Cecil Airport in Jacksonville, Florida, as their base of operations.

“For this campaign we’re doing something a little different. Our priority is to conduct flights in regions with human-made aerosols to better understand what effect they have on the development of high concentrations of ice crystals,” said Thomas Ratvasky, HIWC’s principal investigator from NASA’s Glenn Research Center in Cleveland. 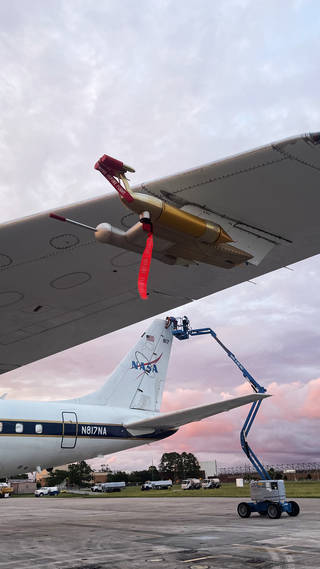 These tube-shaped instruments on the tip of the DC-8’s wing are used by NASA’s High Ice Water Content research activity to gather data on ice crystals. The isokinetic probe (left) measures total water content in clouds. The other device is a cloud droplet probe that measures smaller cloud particles.
Credits: NASA / John Gould

Aerosols are tiny particles in the atmosphere that result from a variety of both naturally occurring and human-made sources. Burning of fossil fuels, industrial emissions, and agricultural activity are just a few examples.

These pollutant aerosols, once released into the air, move through the atmosphere, and eventually can be carried out over the ocean.

Once they interact with convective systems, one theory suggests they can increase the concentrations of ice crystals present in a thunderstorm – although exactly how this complex interaction works is generally unknown.

In these storms, specifically mesoscale convective systems, high concentrations of ice crystals form. When an aircraft flies through them, its jet engines’ power and performance can decrease.

That’s why HIWC researchers have been gathering data on ice crystals, their prevalence, and their effect on jet engines.

With this additional flight campaign attempting to study aerosols, HIWC is bridging a gap in the existing data that regulatory bodies will use to consider new safety standards for mitigating ice crystals.

“We want to make sure that high-aerosol environments are represented in this dataset. Many of today’s engines were not required to demonstrate capability in flying in these ice crystal conditions, but future ones will,” Ratvasky said.

During the past 30 years, there have been more than 170 reported incidents of power loss and engine damage in commercial transport jets such as airliners when flying through convective systems.

Here’s how it happens: jets fly through an area with a high concentration of ice crystals. Some of the ice crystals enter the core of the engine – where its power is generated.

In some conditions, the ice crystals form a layer of slushy water inside critical components such as the compressor. The transfer of heat from the engine into the icy slush causes ice to build up in the compressor. When this ice sheds, engine power loss or damage may occur.

Elsewhere on the aircraft, instruments collecting important information for pilots, such as the aircraft’s speed, also can be obstructed by ice crystals, leading to erroneous and inaccurate readings in the cockpit.

To learn the role aerosols play in the development of high concentrations of ice crystals affecting an aircraft’s performance, HIWC is utilizing NASA’s DC-8 aircraft, based out of NASA’s Armstrong Flight Research Center in California, and flying through storms with a high amount of both ice crystals and aerosols. 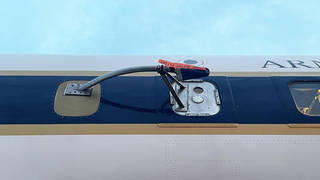 An air-inlet tube sticks out of a modified window aboard NASA’s DC-8 airborne science laboratory. As it flies, air enters the tube and is guided inside the aircraft, where instrumentation detects how many aerosols are present in the atmosphere. The work is part of NASA’s High Ice Water Content research activity.
Credits: NASA / John Gould

The HIWC team has souped-up NASA’s DC-8 with their data-gathering instruments and other technology, allowing onboard researchers to study the environment in real-time.

On the DC-8’s left wing and nose are devices to measure the total water content of the clouds the aircraft flies through, as well as a probe to measure smaller cloud-sized droplets.

Meanwhile, the right wing is home to particle instruments capable of measuring the size and shape of the larger ice particles.

Inside the nose is a modified weather radar, used in collaboration with researchers at NASA’s Langley Research Center in Virginia, to detect storm conditions up ahead of the DC-8’s flight path.

A new instrument added to the aircraft for this flight campaign is the Passive Cavity Aerosol Spectrometer probe. This canister-like device measures the number of aerosols in the air.

Nagoya University in Japan owns and operates this and other aerosol instruments and is collaborating with HIWC in the research.

On the aircraft’s starboard side is an inlet that directs air into the aircraft itself, where it flows through a series of instruments before being exhausted out of the aircraft further downstream.

Inside the DC-8 are racks of monitors, displays, and other stations where researchers sit and view the data as they fly.

Each flight lasts approximately seven hours, and thousands of miles are flown at a variety of speeds and altitudes.

In a typical flight profile, the team flies at the same higher altitudes as airliners to fly through ice crystals. Then, they descend to very low altitudes – even below 1,000 feet – to hunt down aerosols before they have risen into the storm and interacted with cloud and ice crystals.

Rest assured; safety is paramount. The aircraft is in the hands of experts who know what to expect and how to deal with ice crystals.

“We’re not flying anywhere different than an airliner would fly so we can get data that is applicable to normal operations. Our pilots and the entire team are aware of the hazards to engine and air data system performance caused by HIWC and we utilize procedures to minimize those hazards,” said Ratvasky.

A look inside NASA’s DC-8 aircraft, facing forward. High Ice Water Content researchers sit at these consoles and operate equipment that gathers data on the outside conditions they are flying through. The aircraft’s flight deck can be seen in the background.
Credits: NASA / John Gould

“We could not do this without all the collaboration both internal and external to NASA. We have the science group from Langley, the icing group from Glenn, and the airplane from Armstrong. The FAA is supporting instrumentation, and Nagoya University and the Japan Meteorological Agency have provided their expertise and aerosol instrumentation,” said Ratvasky.

Following the flight campaign, the next step is to process the data then pass it on to the FAA and other bodies such as the Ice Crystal Icing Aviation Rulemaking Advisory Committee.

Once studied, the relatively new standards for jet engine certification will be assessed and could all but eliminate power loss incidents due to ice crystals in convective systems.