The following article is by Fabrizio Boer (Launcher & Spacecraft Engineering, Space Systems Design and Technology Expert in Space Industry, Space Architect) and is published with his permission.
https://www.linkedin.com/in/fabrizio-boer-00a30017/

The popular International Space Station or #ISS has needed as many as 40 launches, some $13B of taxpayer’s money, and a time range of 18 years to be built in its current configuration.

Clearly, the performance of a Launcher has a big impact and determines how fast and economically sustainable is a Space Exploration Project overall. You can have designed the best Space Modules, the most sophisticated Infrastructures items, the most efficient Power Systems but if the rate of Launch and mass capacity is low this will undermine the overall performance of the Space Exploration. And the longer is the time needed the higher will the labor cost.

The SLS Launcher of NASA, the one replacing the Space Shuttle, with its predicted 1-2 launches per year will have a cost of over $1B per launch and a Payload price of over $50,000/Kg.

Fortunately, the Space X #Starship is capable to do much better than the SLS in terms of price and capacity but its reliability is still to be demonstrated especially for a Moon mission. The Starship design has been dictated by requirements that are suited for a Mars mission and its steel-based structure, a mass penalty that could much be avoided for a Moon mission, just demonstrates that. Also, its hybrid man/unmanned Payload can bring to unknown consequences in case of a life risk accident.

The Blue Origin New Glenn is, for now, a totally unknown program perfectly in line with the style of his Boss, Jeff Bezos.

Other Launchers are in preparation but none of them pledges to host a large amount of Payload mass for a Moon mission.

The SHIPinSPACE newSpace Company in the UK has been the only one that has chosen to pursue the specific goal to just focus on cargo Payload and on a mission to the Moon, a strategy that is believed to be winning in the future marketing scenario where Space Agencies and private companies are loomed to invest massively for establishing their permanent infrastructures, let humans live there permanently as a Colony and start Industrial activities aimed at exploiting Moon resources.

The vision of SHIPinSPACE is of a company that understands that whatever are the goals of Space Agencies or private companies, this will require an enormous amount of cargo in form of machinery, robots, equipment, power stations, tools, consumables,…to be sent to the Moon in order to prepare the basic infrastructures needed to exploit Moon resources from Lunar regolith. I estimate a minimum amount of 500 metric tons to be needed to activate basic industrial activities. 3-4 times more for extensive industrial exploitation models.

The LBL cargo capacity of over 60 metric tons to the Moon surface in a single mission is the highest ever and its capacity to LEO of 260 T would be able to send all the ISS items in a couple of missions, against the 40 that have been required.

This is the scale of capacity that I reckon to be needed to spur Space Exploration at a scale that can be economically sustainable by both Space Agencies and private companies. 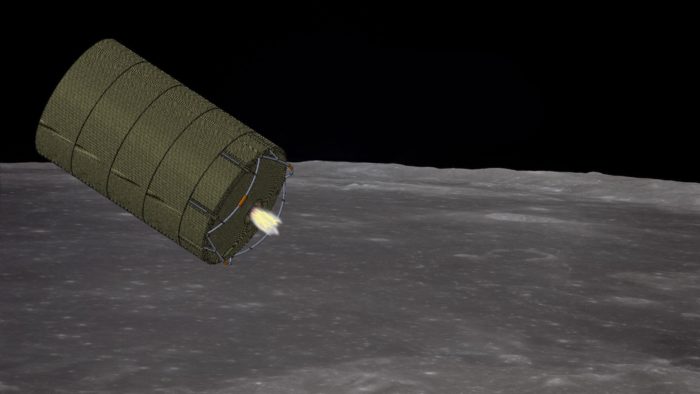 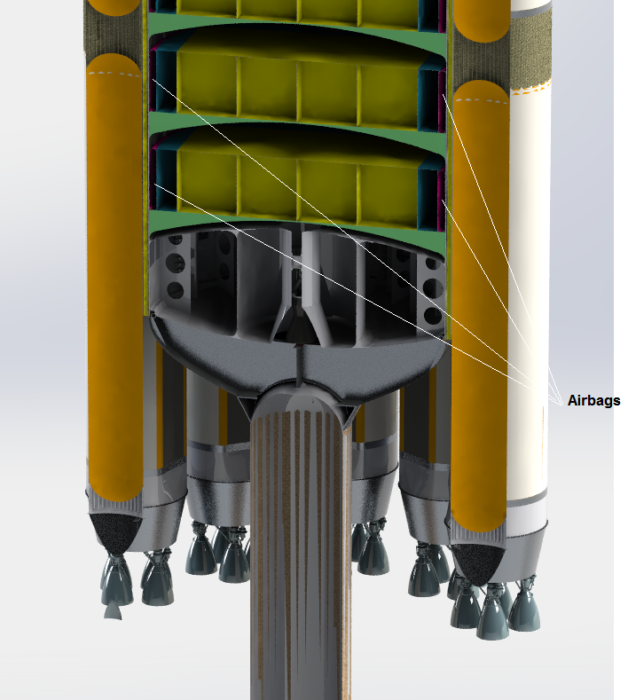 Sending cargo using Airbags as in a shipping container to pre-compress the cargo boxes without needing to design and manufacture specific mechanical interfaces is certainly the smartest way to reduce the Payload cost and the time to have it available for launch.

People do not always realize that one of the bottlenecks of increasing launches cadence is the fact the Payload is not available. How can you have 30 launches per year if the Payloads are not able to follow this cadence? If a Payload requires to be rigidly fixed to a mechanical adaptor via bolts, belt,.. it requires many thousands of hours to design, manufacture and verify it through testing before it is declared ready for launch.

Setting instead the Payload inside standard boxes with variegate size and using light-weight polymers compatible to vacuum to keep it safe inside a box, as your precious laptop is delivered from the warehouse, is not only fast and cheap but also the most efficient way to reduce the amplification factors (level of vibrations) and the possibility for the Payload to sustain the loads of a Launch mission.

This Payload accommodation is the smartest you can imagine for reducing cost and this in turn will spur the many private companies that intend to participate to the Moon resources exploitation with an economically affordable business plan.

The post-Covid-19 business model will shift from traditional Aerospace business to newSpace Projects.

The severe recession that Aircraft manufacturers and Airlines are experiencing will not be recovered for many years to come with the always impending uncertainty of a new bug that can determine a new Pandemic lockdown.

It is time for Investors to realize that newSpace Projects like the LBL are neither technically nor economically more risky than traditional Aerospace projects. It is just true the opposite.